Yes, those are REAL stars not photoshopped, this shoot was done at night at the beach!

I had the privilege and honor to shoot Stephanie Zakas for the Bulldozer project http://bulldozerproject.org/ Check them out!
This means so much to me to have been able to add something to this project, I think EVERYONE deserves to feel beautiful.

This project is aimed at working with survivors of domestic violence and giving them images that empower who they are! Stephanie had never gotten a shoot like this before, she is a seasoned wedding photographer so being in front of the camera was a bit daunting for her. She braved through it though and we got some really amazing images collaborating on this shoot!

"The Bulldozer Project is here to make you feel empowered and celebrate your life. We want to show you what an amazing human being you truly are and the beauty that is you." #knockdowndomesticviolence http://bulldozerproject.org/

How did I do it? (the nerdy stuff)

The shoot was actually complicated to pull off, the first location we went to had too much ambient light so it was difficult to 'Freeze' the dress as the camera was set for long exposure then i would fire the flash just before the camera was finished its exposure. So although the boardwalk looks pretty cool in the photo (seen below), it made a blur on Stephanie and the dress. WHICH i don't think is awful, a sort of happy mistake!
I had an AD360 flash just off to the left of the camera, and the camera was on a tripod set to fire after 2 seconds. I started with an octobox attached (see here for an old video on it! https://youtu.be/uGGyPlNcdsM )

The exposure at first was at ISO 2000, at 16mm on F4.0 for 20 seconds. I thought this lent well to capturing the stars and ambient light and making the sea look kinda mystical. I then started experimenting with Faster Shutter and High ISO but it just didn't feel right in that scene 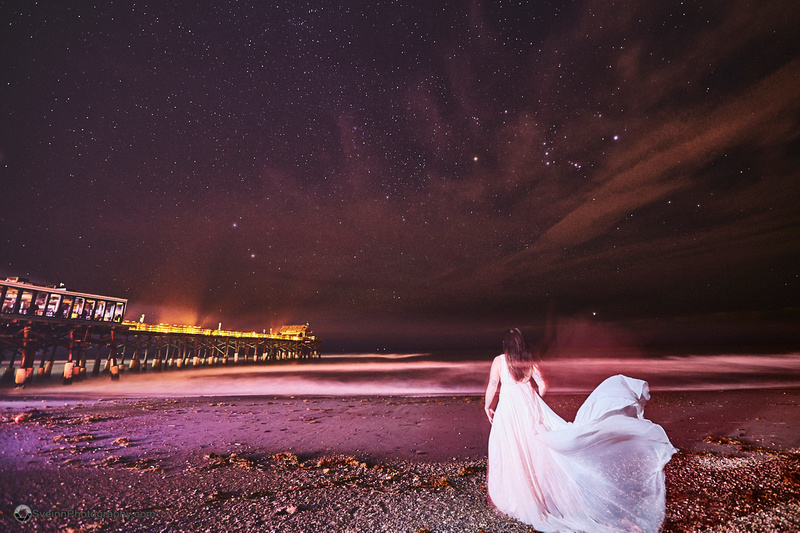 We then went to a second location further down Cocoa Beach to find a spot with less ambient light. This (seen below) turned out to work much better! My final settings there were ISO3200, 16mm at F4.0 for 10 seconds. I was able to capture the brilliance of the stars (and some at the time unappreciated florida clouds hahah) and freeze the dress. I then took the images in to Capture One Version 9 to test out that software (which i thought was decent but not enough to replace my lightroom and photoshop combo yet).